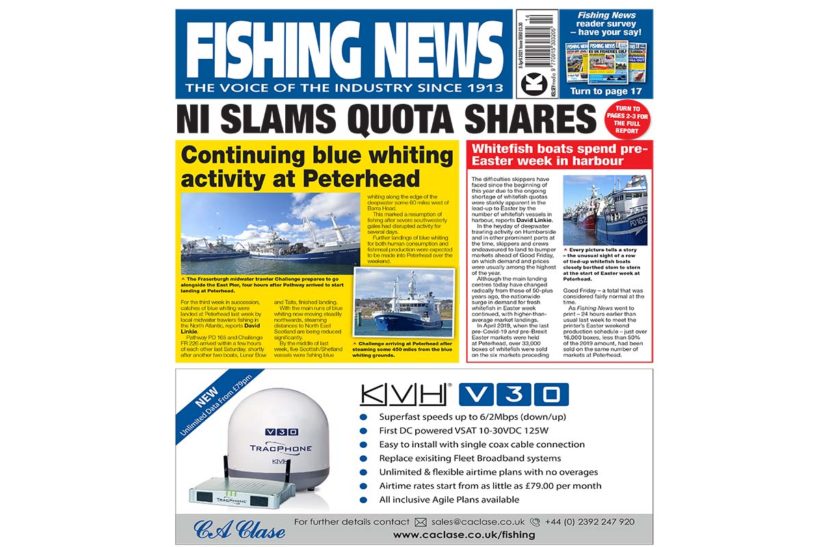 Northern Ireland says Westminster has ‘looted’ its fishing industry in the distribution of the extra post-Brexit quota among the four UK administrations announced last week – as it feared would happen, reports Tim Oliver.

Industry leaders say Northern Ireland’s share of the extra quota does not reflect its fishing activities across British waters and that Westminster has distorted the distribution ‘in a cynical attempt to woo voters in Scotland and elsewhere in the UK’.

For the past five months, they have been asking London to distribute the new quota across the UK on the basis of existing quota sharing schemes.

Northern Ireland’s share of UK quotas before Brexit is 9%, and local industry had asked for 9% of the new quota, worth almost £ 20 million a year, but allocations have reduced that share by almost a third.

“DEFRA has given us a fair share of our 20% in the Irish Sea, but has robbed us of new opportunities in other areas,” he said.

The UK’s 2020 Fisheries Act legislates “equal access to UK waters for all UK fishermen”, but London clearly considers some fishermen more equal than others, depending on which part of the UK you live in.

“In the North Sea, Northern Irish fishermen have been deprived of virtually any Brexit yield, while some of the yield in the Celtic Sea has been cut by more than 75%.”

He said the distribution had been manipulated to favor some areas more than others, despite the Conservative Party’s 2019 manifesto promising a full Brexit dividend for Northern Ireland. “Actions clearly speak louder than words, and the government has failed to live up to that commitment to our fishermen.

“The result is a loss of millions of pounds every year for the foreseeable future, not just for the fishing industry but for the Northern Ireland economy.”

problems with the Irish Sea

But at the same time, Northern Irish fishermen are not allowed to enter a significant part of the fishing grounds in the Irish Sea where they previously fished, within the Irish 12-mile limit.

“Before we start using the NI protocol to sell seafood, we need to catch the bloody stuff first,” he said.

“If the fleet cannot operate at full capacity in the Irish Sea, there is all the more reason to have a small share of waters beyond the Irish Sea.

“We have come a long way from the full Brexit dividend that the Conservative manifesto promised – they have taken the quota from us and distributed it across the UK, primarily to Scotland.

“Kilkeel is right on the border and the Kilkeel fleet spends a lot of time fishing in Irish waters.

“We have told London: ‘Do not forget the fishing industry down here’. Access to Irish waters is important to us, and so is access to British waters for them.”

He said access to EU vessels to Britain six to 12-mile limit – caused by French President Emmanuel Macron, who refused to sign the Brexit TCA unless it was granted – “created revolt in England, understandably”.

But Northern Ireland and Ireland wanted mutual access to each other’s six to 12-mile borders, ‘but when the details came out, we had been forgotten’.

Still, the TCA provides special conditions for the Isle of Man, he said – the EU and the Isle of Man have mutual access to each other’s 12-mile border.

“There are a number of issues around the Irish coast between 6 and 12 that have not been resolved yet, but at the same time it is unfortunate that officials recognize the priority in the North Sea for the Scottish Navy to gain access to Norwegian waters,” said the ANIFPO chief. .

“I wish there was the same priority of trying to access our fleet to Irish waters, but as a Conservative MP told me the other day, that number is ultimately – there are 650 MPs in the UK and only 18 from Northern Ireland, and that just sums up the whole game – that Northern Ireland does not matter. ”

He said that while the decision has been made for this year, ‘George Eustice has been quite aware that the decision is only for one year and that the fight will continue now and then we will see what happens in 2022’.

He added: “It would be an irony if they give the fish to Scotland and in a year or two they will have an independence vote and take it all back to the EU!”