Although there are many fishing games on the market, few offer you the chance to wear your captain’s hat and take the helm of F / V Viking Power, an advanced scallop fishing vessel.

It is true! PlayStation consoles offer more than shooting or racing games, and there are also titles that look at fishing. There are dozens of fishing simulations for the lone angler, and if you are interested in the subject, search for the term online to discover a wide range of options.

But the fishing industry is not forgotten and there are some titles that will allow you to dive deep into commercial fishing … from your home.

Fishing: North Atlantic – Scallops, launched almost a year ago, is a PlayStation 4 game – or simulation if you prefer the term – that expands the original title and offers you 3 new boats to add to the 27 that are included in the base title. The three new boats, from a small vintage to a large scalpel, include ships such as F / V Viking Power or F / V Ocean Scout, from the new licensing partner, USA. Fleet fishing.

Launched on June 8, 2019 in Alabama, where the fishing vessel was built F / V Viking Power is now actively fishing for mussels out of the US port of New Bedford, Mass. In the simulation, you can select this vessel and discover all the things that set it apart, from the unique shape to the hydraulic A-frame winches that drop the scallop scrapers into the water and then pull them back up onto the deck, which is also meant to improve efficiency and safety. 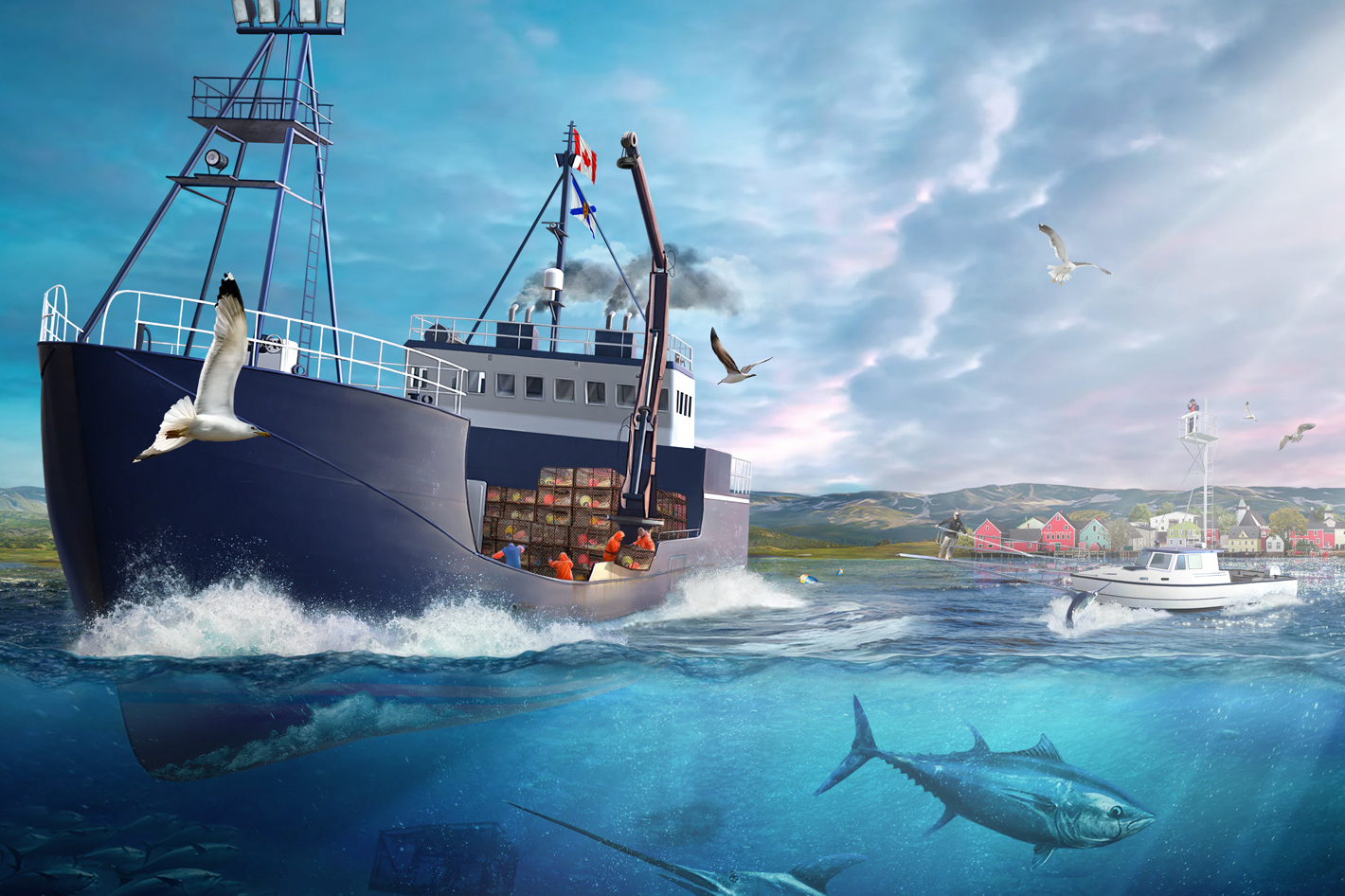 Like the previous titles in the series, Fishing: North Atlantic – Scallops allows you to experience an atmospheric and realistic game world based on real maps, boats and fish species.

Nova Scotia is not only known for its rich fish stocks such as bluefin tuna, lobster and swordfish, but it is also home to one of the largest scallop fishing industries in the world, and it is the key element of this DLC, Fishing: North Atlantic – Scallops, which expands on the basic product, Fisheries: North Atlantic.

Launched in June 2012, Fishing: North Atlantic, the basic simulation, offers a total of 27 real handmade boats available from the fishing industry’s licensing partners, including AF Theriault & Son, Skipasyn, Scanmar, Hermes, Selfa and Moen Marin. The available vessels can be used for all types of fishing styles and fishing techniques such as harpooning, which is used to hunt swordfish and tuna.

Start with harpooning, then work your way up to setting deep lines, catching snow crabs or lobsters. As well as longline, net and trawl. Do you have what it takes to solve this challenging task?

The base map is the same as the one in Scallop’s DLC: a large part of Nova Scotia, Canada (200×300 km) with six realistic gates. It gives you a virtual window to admire the great diversity of marine life, exploring the fishing zones with upgradeable ships and gear as you progress in your career. 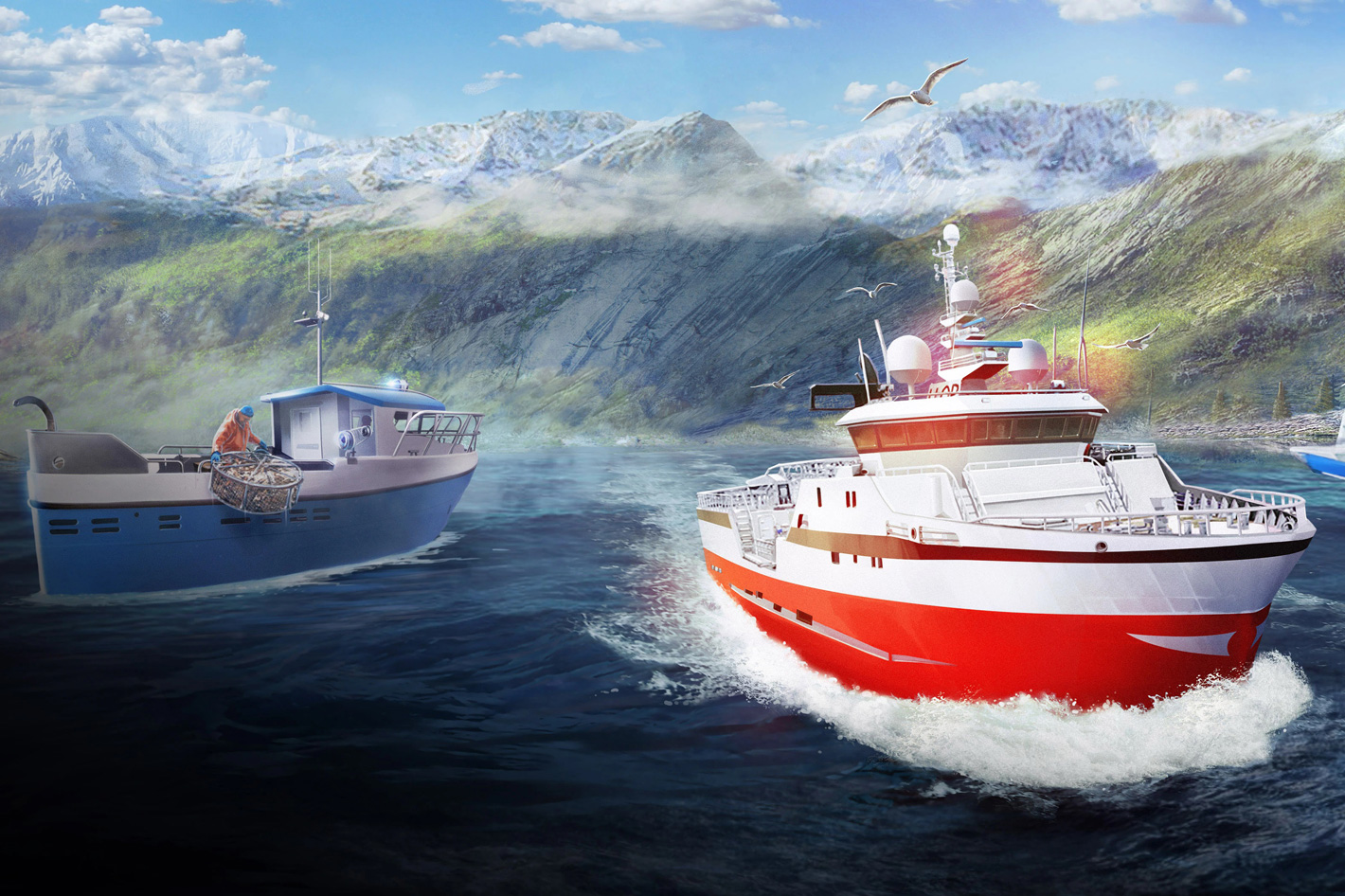 The Barents Sea, where it all started

The entire series started back in 2018, with Fishing: Barents Sea being released followed by two DLCs that expanded the base title: Our Line and Net Ships and King Crab. In Fishing: Barents Sea you experience life as a fishing boat captain, start with a small boat inherited from your grandfather, make money fishing with longline, net or trawl, buy upgrades, bigger and better fishing boats as trawlers and a lot more.

Fishing: The Barents Sea introduced the key characteristics that made the series an interesting simulation: an atmospheric and realistic game world with day and night cycle, seasonal effects, advanced resource and weather system. Everything is calculated based on real maps, real boats, real fish including age, breeding areas, depth, fishing quotas and much more.

The player is invited to discover an open environment around Hammerfest in northern Norway, maneuver a fishing boat around the map to find the best fishing spots using the fishfinder, radar and GPS. Visit different ports, hire crew or apply for missions, go into the dock to repair or upgrade your boat, go to the bank to get a loan or to the store to buy supplies.

Use of GPS and sonar

Search for the best breeding ground with brand new mini-games. Use cranes to prepare, tow and empty the mud nets, control drums to lower and raise the mud nets on board your ship. Sort and hold a calm hand while cleaning the scallops before storing them fresh at the hatch of your boat. Go back to the harbor to make money!

Plan the course of your fishing career throughout the year: Against rain and snow while looking for the best fishing areas, but make sure you are not in danger of exceeding your quotas! The new advanced fish-AI will require the use of GPS and sonar to track the movement of your prey depending on the weather and season.

Some key features of fishing: The North Atlantic

Developed by Various gamesa company from Norway that aims to treat video games “as art rather than toys” and wants to “develop games mostly towards the more mature and educated players”, the Fishing series is an example of the team’s goal: to become the world leader in ship simulation games.

June 6, 2022 Chuck Norris, a new nut from Bristol Bay, was designed to fish in extremely shallow water and stay there longer than other…

July 19, 2022 Libby 76 sails along Knutson Bay. The proposed road for the development of the Pebble Mine would be located directly above the…

Now that the snow in Alaska has melted and the water has become warmer, fishermen who overwintered changes or built new boats are launching their…